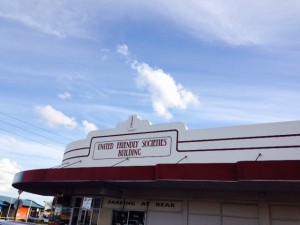 It was built on the site of one of the first soap factories in WA. Sited as a corner shop with an Art Deco facade with a simple monopitch

corrugated iron roof. Friendly Society Dispensaries were first established in Australia in the 1840’s. They were established as a direct response

to two significant problems of the day – one was the high cost of medicines and the fact that many chemists commonly adulterated their drugs.

So they had the philosophy of a true not-for-profit, co-operative principle.