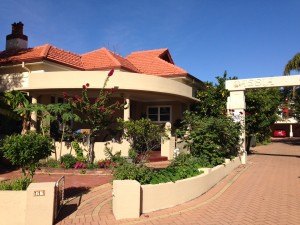 111 Parry St and 278-288 Pier St, Perth, WA, 6000
According to PCC records of 1940-41 “…a complex of single storey flats- known as Tassia Court- and designed in an Art Deco/Inter-War Functionalist style, were constructed on the south-eastern corner of Parry and Pier Street.” They comprise 2 rows of 4 dwellings facing each other across a private driveway leading from the named archway to garages at the rear. The adjoining 6 attached single story flats on the corner of Pier St are of the same era. Many deco features are still to be seen today.