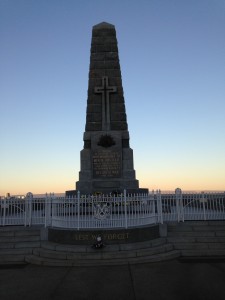 Comprised of the Court of Contemplation, Flame of Remembrance, Pool of Reflection and Anzac Bluff, it was developed around an obelisk as the principal feature, which is almost a replica of the Australian Imperial Forces Memorials erected in France and Belgium.

The imposing gates  by Athol Hobbs and WT Leighton was designed by J J  Talbot Hobbs and  is in a magnificent position in Kings Park overlooking the city.