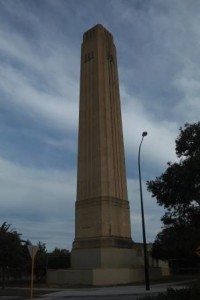 Built on the corner of Lincoln and Smith Streets the sewer tower was built with similar proportions to New York skyscrapers, to vent sewage fumes into  the atmosphere. The tower is 38 metres tall and built in the industrial Art Deco style. Inadequate design led residents to complain of unpleasant smells and the base of the tower was cemented over to render it non-functional. The tower was referred to as Dumas’ Folly after engineer RJ Dumas. In 1942, the police wireless facility was secretly moved to the Highgate Hill Police Station as the tower served as an excellent antennae mast. It was not until 1956 that the location of the wireless section became public knowledge. The tower was used for an antenna mast for police wireless communications until 1975.