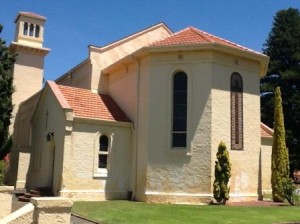 Architect: Marie Jackson. This Art Deco building is  a fine example of the Inter-War Romanesque style and  built by the Clontarf boys and Brothers. A narrow tower with an arcaded belfry is located in the south-eastern corner. An original chapel bell was a personal gift of the Archbishop of Perth who consecrated the building on December 20th, 1941. Soon after this time, the College was occupied by the RAAF for the remainder of the war years