Francis St and Parker Street, Northbridge WA 6003.
The 1930’s saw many Greek immigrants move into the Northbridge area. This Greek community continued to raise money for a church through dances, raffles and bazaars, as well as popular concerts. By the mid 1930’s there were enough funds and the church was commissioned and designed by Harold Boas of prominent local architectural firm, Oldham, Boas and Ednie-Brown. It is an excellent example of their ecclesiastic work. The Cathedral of St. Constantine and St. Helene was built in 1936-37 and was consecrated by Archbishop Timotheos on 18 April 1937, and was the first purpose-built Greek Orthodox Church in WA. Its officially known as stripped down byzantine style but those gates! 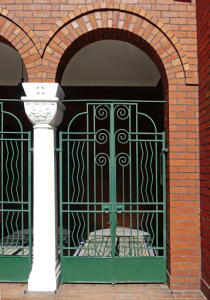