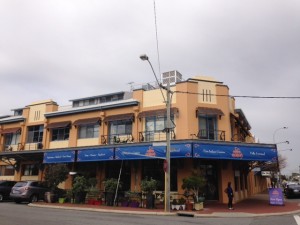 Imposingly situated on the corner of South Terrace and Jenkin St,  as it is now known was built in 1898, and the Industrial Art Deco frontage was built in the 1930’s. It was built by William Mills and Henry Ware as the Mill’s and Ware’s Biscuit factory and later Arnott’s was an integral part of the history of Fremantle for over a hundred years.