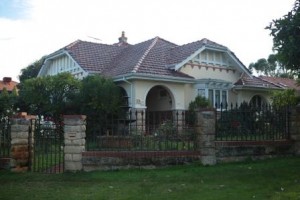 Built and designed by Horace Costello, this distinctive inter-war home was built in what was then known as Mt Lawley number 2 estate. It was built for the Brennan family who founded Golden West cordials and Gest soft drink company. The bathroom had the first-ever enclosed shower to be installed in a Perth home, before that everyone showered in the bath tub.